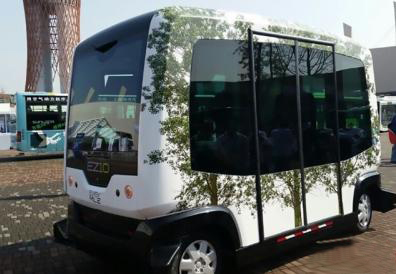 Technology is not difficult to get on the road. Difficult driverless driving in the field of passenger cars is relatively hot, but driverless technology may be the first practical application in the field of commercial vehicles. Daimler CEO Ze Che has said that the application of driverless technology on trucks will have great potential. In fact, this is the case. At the 2014 Hannover Motor Show, Mercedes-Benz launched a high-profile driverless future truck. So how big is the potential of a driverless bus? Letâ€™s first look at the EZ10, a passenger car that appeared in China. The reporter learned at the scene that the power of the car is pure electric and the driving range can reach 120 kilometers. From the outside, the vehicle looks like a closed, mobile small house with wide windows and a wide view outside the car while watching the car. When the vehicle is running, if you stand by the car, it will automatically stop and automatically open the door. The steering wheel, dashboard, and the driver are not visible in the car. The number of seats installed is small, and most of the space is for passengers to stand. The maximum number of passengers cannot exceed 10, otherwise the running effect of the vehicle will be affected. An electronic screen will be visible in the car. The operator can plan the line and site through the electronic screen. As a passenger, you can also use this screen to understand the specific running route of the vehicle. In addition, according to field staff, the EZ10 body has four radar probes that are expensive to install. In addition, it is the control system of the vehicle, which is the key to driverless technology. The above-mentioned Yutong technicians stated that, overall, these technologies are not difficult to achieve. For current unmanned technology vehicles, the more difficult thing to do is not to have a proper and reasonable road environment. It is worth mentioning here that EZ10 is currently used mainly by Michelin companies and some universities in Europe. â€œIt can be promoted in relatively closed and fixed routes, such as factory shuttles. Driverless cars will run on highways and will not be realized in the short term,â€ Yutong technicians said. It is reported that the European Union is currently considering â€œlegislativeâ€ to regulate the development of driverless cars, including how to take legal responsibility when an unmanned vehicle and an accident occur in a conventional vehicle. Singapore also said that in order to ease traffic congestion, it will allow unmanned vehicles to enter the road in 2015 and will invest in public transportation. However, according to a British public opinion survey, ordinary peopleâ€™s support for unmanned cars on the road is not high, mainly because of safety concerns.

An insider of a bus company revealed to reporters that from a technical perspective, the research on unmanned driving is mainly due to the touch on cutting-edge technology. Even if a prototype car is not put into the market in large quantities, it is only limited to concept. The greater significance of models is to regard unmanned technology as the future technological reserve. At present, in the passenger car industry in China, as a whole, not all or only a handful of companies have touched on drone-free technology. Then, to what extent has the international unmanned passenger vehicle developed? Or use EZ10 as an example. It is certain that this car has achieved true operation on some of the more closed roads in Europe, but for the passengers, how is their test ride experience? Here, the reporter recorded the feeling of on-site test ride. The most obvious problem is that in the setting of the road, it is best to go straight. Since the driverless vehicle encounters a turn, the response will be very slow. Even stop. This means that road conditions have a great influence on the driving of driverless cars. Letâ€™s take a look at how Singapore has applied driverless buses to the public transportation sector. It is reported that Singapore plans to open a community to driverless cars in 2015. It is hoped that this new technology can serve public transportation and pick up passengers. In other words, it is to solve people's last-mile travel problems. In order to reduce traffic congestion, walking, cycling and public transport have become the main mode of travel in the region. As such, Singaporeâ€™s driverless cars are also operating at short distances. This again shows that the operating environment of driverless cars is still subject to many restrictions. In addition, it is reported that there are also driverless cars in operation in France, but only for specific purposes, the number is not so much, only for short-distance driving. Driverless cars are considered as one of the city's five major action plans in France. Perhaps, in the future, with the continuous improvement of relevant legislation, the continuous breakthrough of unmanned driving technology, and the opening of special lanes for unmanned passenger cars, the conditions for unmanned driving will come. The driverless EZ10 driverless passenger car can be automatically stopped. Although the interior space is small, the vision is wide. This screen allows you to set vehicle routes, stations, etc.